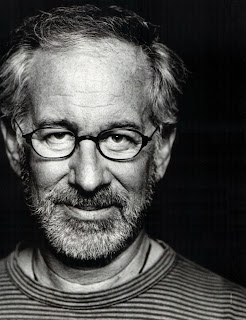 "He still goes to see movies - picks an out-of-the-way cinema, sneaks in with his wife or kids after the lights have gone down, then disappears again as the credits roll. He always takes an aisle seat and buys no food or drinks for himself. He's just there for the film, or, more specifically, the film and its audience. He loves feeling the heat rise in the cinema during an especially exciting action sequence, or after a gag has rocked everyone back in their seat.

Spielberg- "You walk into an air-conditioned, freezing theatre and, about 20 minutes in, it starts to get really hot. People start making noise and having a good time. You're lifted by it. The first thing that happens is, people stop eating. They even stop swallowing."

At this point, the third-person plural drops away. "And all of us go into a kind of lock step where, if we were watching a tennis match, you'd see that perfect synchronicity of heads going left-right, left-right. The same thing in a movie theatre, when the movie is working and the audience is galvanised, almost hypnotised, all watching the same things, all knowing where to look at the exact same time...it's a wonderful thing. There is nothing greater than that."