The other type of continuity

Along with cinema there is another medium that is obsessed with continuity: comics. The universes created by comic giants DC and Marvel have strictly enforced continuity so that super heroes like Superman can pop up in other characters plot arcs such as Batman and all actions fit within their own overarching stories.
The lengths that fans, writers, artists, and licence holders go to to maintain continuity within comic universes (along with the related Sci-Fi and fantasy universes such as Star Trek, Star Wars, and Doctor Who) is remarkable. The recent spate of Marvel movies including Iron Man, The Hulk, and next year's Thor have shown how universe continuity can be maintained in cinema and create innovative sequels/crossovers. Whether or not they work for the general public is yet to be seen. I personally love the Avengers super-hero team but is the world really ready for cinematic versions of AntMan or the Wasp?
I guess we'll find out over the next few years but for now lets enjoy a musical ribbing of the whole phenomenon. 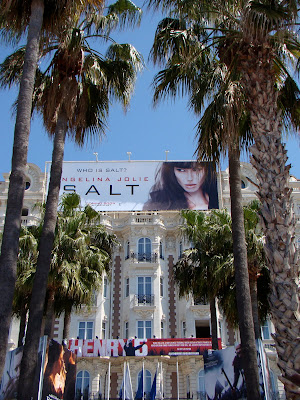 Greetings from the Cannes Film Festival 2010! After years of eagerly reading about all the gossip, film news, and screenings at Cannes I finally got the opportunity to attend the festival. Friends Calum Waddell and Naomi Holwill from new Edinburgh based production company, High Rising Productions (http://www.highrisingproductions.com/) asked me to join them on their Cannes experience and help out promoting some new film projects. How could I resist!
My first impressions of Cannes have been surprise and awe. You really get a sense of how much film is an industry when you are wandering around the film market and attending the market screenings. The glossy public face of the festival, the Official Competition is really just the polished face of what is really a massive buying and selling market for films. Cannes is completely mis-labelled as a festival as only industry representatives or press can get access to the 'festival' and unless you are pretty high up in the industry most of the competition and red carpet screenings will be out of bounds. Most people attending the festival spend their time in the many tiny impromptu screening rooms scattered around hotels or the palais. This year there are over 1400 screenings during the two weeks with 40 cinemas showing films simultaneously!!! Most of the films will be receiving their world premiers here at Cannes and almost all of them are completely unknown commodities. There is a great chance of stumbling across some real gems that may not make it to your local multiplex for a couple more years. Unfortunately, there is a much greater chance of sitting through some absolute dross :)
Whilst I'm here I'll try to post some reviews as I go along. Lets kick off with a couple of British gems and a few stinkers.
2B, directed by Richard Koehling.
I have to confess to being a bit of a Sci-Fi geek (was it not evident from this blog already!) and loving all things AI. The synopsis for this film got me excited: set in a near future New York, a brilliant scientist is killed by the first post-human that he personally created and attempts to transfer his mind into a new body so that he can live forever. The premise is good, if rather familiar and could have made an intriguing, contemplative sci-fi film. Sadly the budget appeared to be micro and while containing some recognisable faces from US TV, Kevin Corrigan (Fringe) and James Remar (Sex and the City) there was either too little budget to afford action sequences of no inclination to include them. Instead the film consists of a series of philosophical debates on the nature of human life, mind and soul. The ideas are good but the execution is without vision and ultimately tedious.
Edinburgh Informatics department, where I studied Artificial Intelligence has a DVD library devoted to all things vaguely related to AI, cybernetics and robots. 2B would definitely make it into their DVD library. I doubt it will make it into anybody elses though.
Redline by Takeshi Koike
Redline is for those of you who love your Japanese animation loud, fast, and intense. After watching this cinematic hit of amphetamines I felt like I needed a lie down! Koike, the director of the Animatrix section 'World Record' has crafted future universe populated by bizarre humanoid characters and an intense form of car racing where anything goes. The story follows a racer, Sweet JP who is notorious for race fixing. After almost dying in a race he unexpectedly finds himself called up for the Universe's most intense race, the Redline which is to be held illegally on the hostile Roboworld. As he prepares for the race a romance blossoms between JP and fellow racer, Sonosee a typical manga heroin with massive eyes, disproportionate breasts, a school girl innocence and a huge car. The action culminates in the spectacular Redline race in which Wacky Races-esque competitors jostle for position whilst also fighting to stay alive against missile attacks from the Roboworld denizens, mecha-suited warriors, giant gelatinous monsters and huge space lasers.
This film is an intense shot of traditional cell animation with a huge dose of Japanese surrealism. Highly fun if you have ADHD but possibly a bit too intense for the general viewing public. Not to be recommended if you suffer from an existing heart condition.
Posted by Tim J. Smith at 8:09 PM No comments: