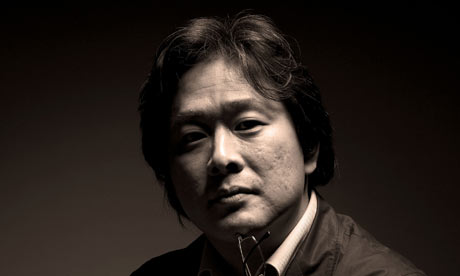 Interesting interview with Park Chan-Wook about STOKER on aintitcoolnews.com. here are some excerpts on his distinctive visual style.

"But it's not always the case that you can explain everything with words. For instance, "Why do I want to use the color red here? Why do I want the camera to move forward here?" Sometimes I make those decisions because I just feel that that would be the best thing to do here. But after I'm finished making the film and watch it later on, I realize why I made those choices. Take the crosscut for instance. I always thought that decision made no sense because of some musical explanation or reason. That is to say, there is a rhythm to the way scenes are crosscut, and I just like the rhythmic nature of using crosscut. However, later I realized, having seen the film again, what I really wanted to express by using these crosscuts is the concept of fate. In other words, crosscut mixes different individuals' past and present, reality and fantasy. Crosscutting is an effective way to weave these together, and the result that I was looking for in doing so is saying, "It is all a fabric, part of a bigger fate."

Discussing a beautiful transition between Nicole Kidman's hair and a field of grass:

"That particular transition didn't really take much in the way of deliberation. It's something that easily came out, so much so that I can't even remember the thought process that brought me there. It was almost instinctive. All throughout the film, I decided to use crosscutting technique. Once I decided on that, I promised myself that I will have one principle that I will abide by, and that principal was each shot, and how they move on to the next - whether the cuts would crash or whether the cuts would continue on smoothly - how each shot transitions into the other shot in these crosscut sequences, it needs to be something very well designed. So I applied many techniques to achieve this, be it match cut, dissolve, what have you. It's born out this base principle. But I did think that this particular transition was particularly important because it was a transition from a mother moment going into a father moment."

STOKER is an audiovisual masterpiece that perfectly continues Chan-Wook's style into Hollywood. At times the aloofness of the characters, lack of explanation and depth of character can make it seem cold and distancing but I personally marvelled in the film's style and this more than made up for its problems of pacing and failure to thrill (which is ironic considering how Hitchockian it feels!).